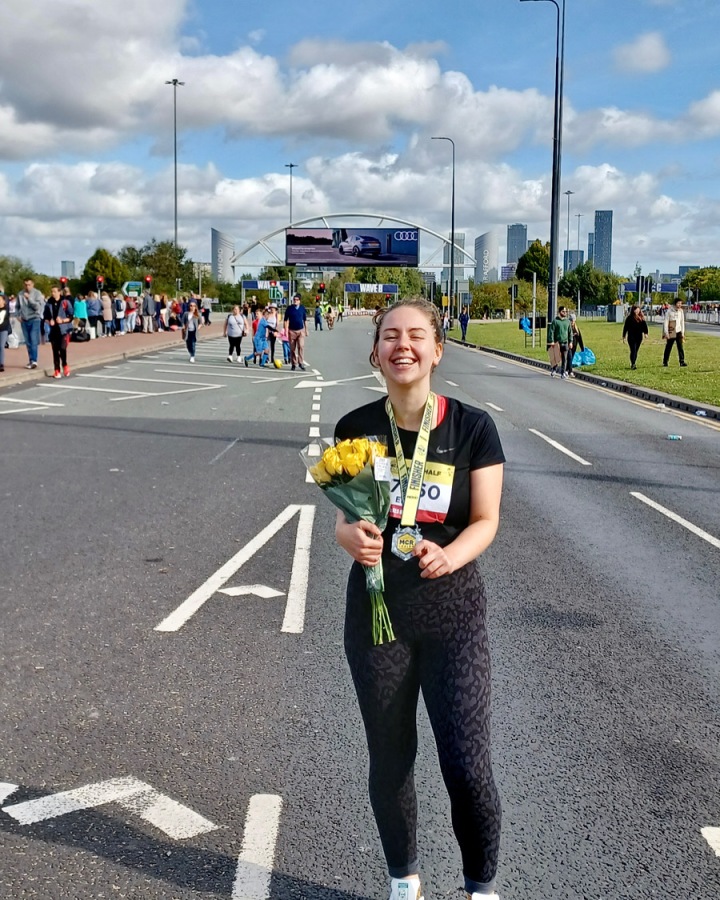 The Manchester Half Marathon was my first ever race and I ran it within 2:14:53.

Runners who actively race are just the elite, aren’t they? Somehow, they’ve cracked the non-existent code and got their life together. They’ve schmoozed their way into a potentially cooler club than Bergain. Whether they’re doing ParkRun or the Manchester Half Marathon, race runners just have it right.

Being part of this sublime club isn’t as easy as it looks. It took me 18 weeks of sweating and self-control. Training for the Manchester Half took grit and determination, but the prospect of having a shiny ‘well done’ medal made it worth it. 18 weeks worth of throwing myself around Salford Quays became monumentally important during my 21.1K stint. I know I couldn’t have done that race if I hadn’t trained for it.

Living within walking distance of the Half was lucky. Making time for sardine-style tram travel wasn’t on my morning agenda. Instead, I engulfed banana and peanut butter bagels, and suited up in my Lululemon Align Leggings, New Balance 1080v10’s, archaic black Nike t-shirt, and strapped my Lululemon race belt to myself. The rule of race day is not to try out anything new, so we went with the classics instead. I tucked a blackcurrant Science In Sport isotonic gel in my pocket too, just in case I craved that pre-race buzz.

At 7am, I traipsed out with serious anxiety and a funny tummy to the Stretford starting point. Easily accessible, the half stating point was situated just slightly further than Old Trafford Cricket Ground, off of Chester Road. The air was electric with anticipation. Some (like me) where individually running, nervous as hell and fizzing about. Others? You could tell this wasn’t their first rodeo. Cool, calm and collected. I was secretly envious.

When I arrived there was a scheduling system in place which correlated with the colour and letter on your personal race bib. The Elite runners were called up first. Second were the racers who had promised to finish the race before the two hour timer. Thirdly, everyone else including myself. I was originally aiming for a 2:30:00 finish so when the gun shot sounded around 8:20am, it was finally my time to shine.

The half’s total distance was 21.1 kilometres. Considering the furthest I had actually ran during training was 15K, I was pretty apprehensive regarding my ability. I didn’t have a strategy to stay motivated or have a certain pace I wanted to run. I just knew I had to do it and do it well.

Amazingly, I managed to kick off my morning run in great style. I was comfortably ahead of the 2:15:00 pacer. And, within the first half, I gained my second best 5K effort (29:33), as well as achieving my fastest ever 10K (1:00:22). With the Manchester Half notoriously being one of the flattest races in Europe, a super smooth start was exactly what I was looking for. Did the constant rotation of SIS gels aid these two achievements? Maybe. I did grab and gobble at every twist and turn. 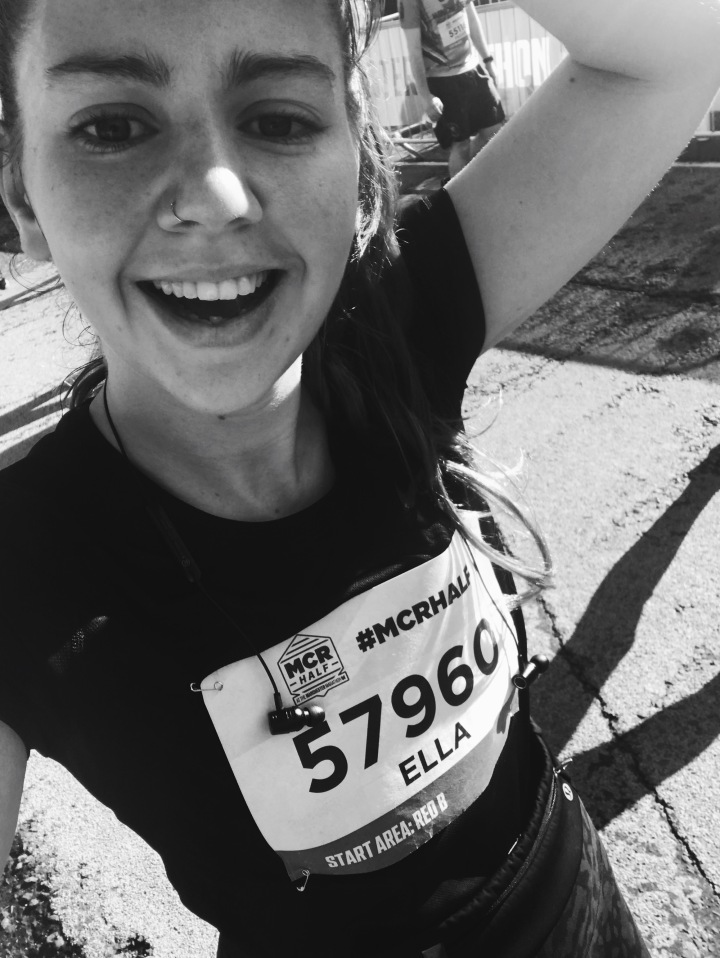 The residential-looped race took us through the streets of Stretford, Sale, Timperley, Baguley, Sale Moor, Chorlton, and Old Trafford. Music was blasting from neighbours gardens, and hordes of homeowners had clustered the streets to shout our names, general encouragement and offer us home-baked sweet treats. The Half organisers had also provided DJ decks with deep house soundtracks posted at various points throughout the race. A serious mental boost and simultaneous distraction.

At 14K however, I started to sag. Running around Sale for the second time caused my legs to feel like lead and I felt myself beginning to butt heads with the wall of no return. I’d anticipated this. I pulled out my headphones. Oasis, Mötley Crüe, and Taylor Swift in – world out.

I’m not sugarcoating it – the second half of the race was gruelling. There were more hills, more opportunities to run out of breathe and big inflatables marking the beginning of the final KM, which I stupidly believed to be the finish line. A push of energy and what I thought was a sprint finish really knocked out the last of my motivation. It was hard. I don’t think I’ve ever mentally forced myself over so many hurdles before.

I essentially hobbled over the finish line. In a rollercoaster of nausea. I was so relived when they handed me my shiny, deserved medal, I sobbed. I couldn’t believe I had finished. I had achieved a distance I could only have dreamed of. A distance which I thought was totally out of reach when I reached 14K. I’d done it. I still can’t believe I did it.

After the race, you are encouraged to visit the Athlete’s Area. Essentially a place to meet up with fellow friendly faces, pick up your belongings and bag some cool swag. I was given a couple cans of Tenzing natural energy drink, an alcohol-free, isotonic Erdinger, and packets of Science In Sport protein powder. I was knackered but my heart was so full as I made my way out of the event village and into the arms of my boyfriend. Spectators weren’t allowed anywhere near the finish line this year, so watching from a far was the only option.

The rest of the day was spent recovering, eating Charlie Bingham’s macaroni cheese and watching Marvel movies. Infinity War is the best FYI.

My mom the masseuse gave me some helpful pre-event massage tips which saved my legs from crippling beneath me in the forthcoming days. I still felt like Bambi on ice for a week after the event, with my legs buckling underneath me on the way to work – but I wouldn’t change it for the world.

The Manchester Half Marathon was unbelievable. The atmosphere was exciting; the race was perfectly organised and the feeling of pride I have when I think about that morning will stay with me forever. I would genuinely recommend this glowing race to everyone. What do you say, are you in next year?

They say you never forget your first race, but I honestly cannot wait for my second.

The Manchester Half Marathon returns in Autumn 2022. For more information, see here.