The final month of 2018! Hurrah! Congratulations for getting through it angels.

I finished the year on a staggering 72 books read, smashing the 60-book goal I had planned back in April.

You can see all the books I read via GoodReads, as well as get on board with 2019’s reading challenge.

In December, I consumed a lot of Philip Pullman, some more J. K. Rowling as well as gave my opinion on the first novel in the Crazy Rich Asian series.  If you are looking for something to get your teeth sunk into for 2019, look no further.

Due to scribing a creative writing assignment on Philip Pullman, I had the perfect excuse to devour some of his work I hadn’t yet had the chance to touch upon.  One of which is The Good Man Jesus and the Scoundrel Christ.

Available to listen to via Spotify, Pullman casts Jesus and his brother Christ in parallel lights.  Jesus is rough, he cares not for his family nor for aiding others, yet possess the gift to do so.  His brother, Christ, has the will to help others, but cannot perform the action.  An interesting potentially blasphemous take on the Bible story + teachings.  I both loved and loathed this book; I cannot put my finger on which one and why.

Harry Potter and the Goblet Of Fire by J. K. Rowling (audiobook)

I’ve constantly had Harry Potter in my ears over the last few months.  Sometimes, I just like something familiar and comfortable to dip into when I am on my way to the pool, or running to the tram for work.  Goblet of Fire is my favourite Potter book of them all by a mile.  I do not need to justify my decision.  You need no other explanation for my listening choices. 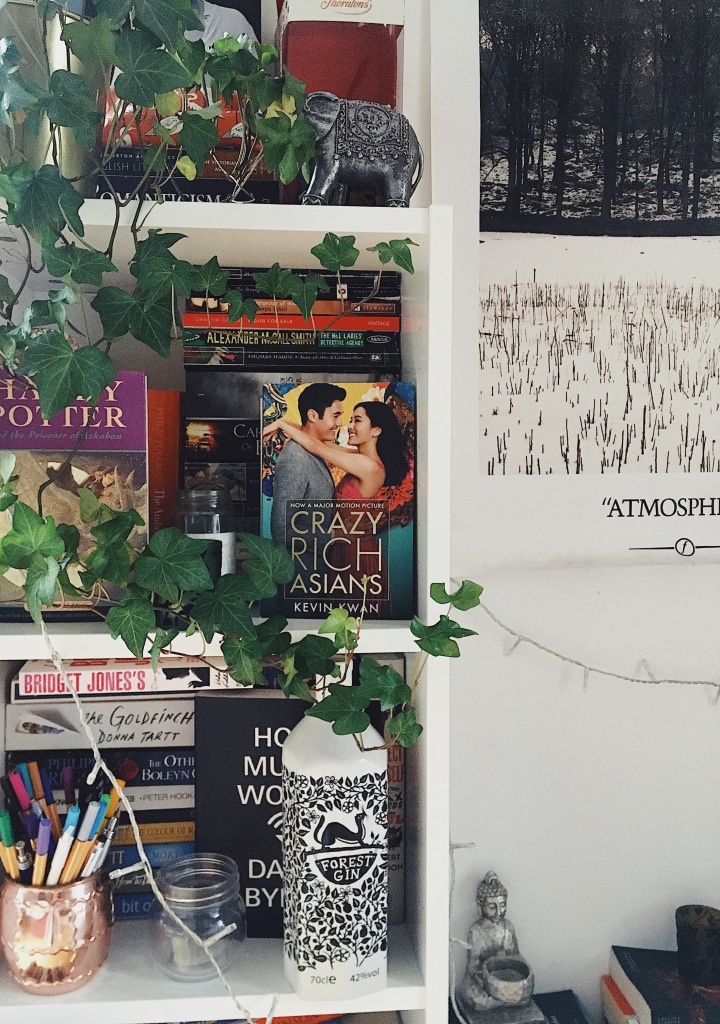 When my flatmate and I went and seen the cinematic version of Crazy Rich Asians towards the end of last year, I was in awe.  It was so glamorous, so extravagant, so extra.  It seems, however, that the film adaptation has nothing on the sheer glitz, wealth, snobbery and unbelievability which the original book by Kevin Kwan possesses.

Rachel is a lot less likeable in the book compared to her pristine, innocent showcasing in the film but the Astrid/cheating husband storyline makes so. much. more. sense in the novel.

I was supposed to be on a book buying ban, but I won’t lie; China Rich Girlfriend and Rich People Problems are currently zooming through the postal system to my flat… Whoops?

Set in a period of time after His Dark Materials, Lyra’s Oxford is a mini-adventure between Lyra Silvertongue and her dæmon, Panteleimon.  In the story (available to listen to via Youtube) the duo encounters a witches dæmon who is frantic for the help of the famed friend of witches.  They must follow and find a mysterious Alchemist who is plotting diabolical things… But not everything is as it seems.

A perfect minuscule adventure to quench your thirst to hear more of the Lyra odyssey.

The Tiger in the Well by Philip Pullman

The most complex and intelligent of all three/four of the Sally Lockhart quartet I have read, Tiger in the Well was interesting.  Sally (with the plus of her daughter and the minus of Fred) has bloomed into a serious force to be reckoned with.  She’s smart, she’s deceitful, she’s fearless and – above all – she is a role model.  A literary role model who I inspire to be.

Tiger In The Well is chock filled with new characters, historical references, insights into London poverty and also features some not-so-welcome archaic faces.  The best one so far.

A curveball, spur-of-the-moment text which did not pay off.  Checking Out is definitely not on my 2018 favourites list.

I am not really one for misogynistic, rich and boring main characters (see how much I hated the protagonist in John Niven’s Kill Your Friends) and the idea of them only getting interesting once attracting an incurable tumour is not my kind of bildungsroman either.

It was funny – a single positive – and I read it very quickly.  Easily digested but never paid off.  No thanks.

The Amber Spyglass by Philip Pullman

The last book I read in 2018 was a photography book featuring imagery of Noel Gallagher’s High Flying Birds.  It’s a guide to the former Oasis’ guitarist/songwriter/master chef’s time on the road with NGHFB’s third record A Beautiful World and features images, backstage photographs and crowd shots of the band across the globe.

There are mini interview snippets on every page also, giving you an insight into the world which Noel Gallagher now controls. A must for any fan of the band.

One thought on “December Book Reviews”