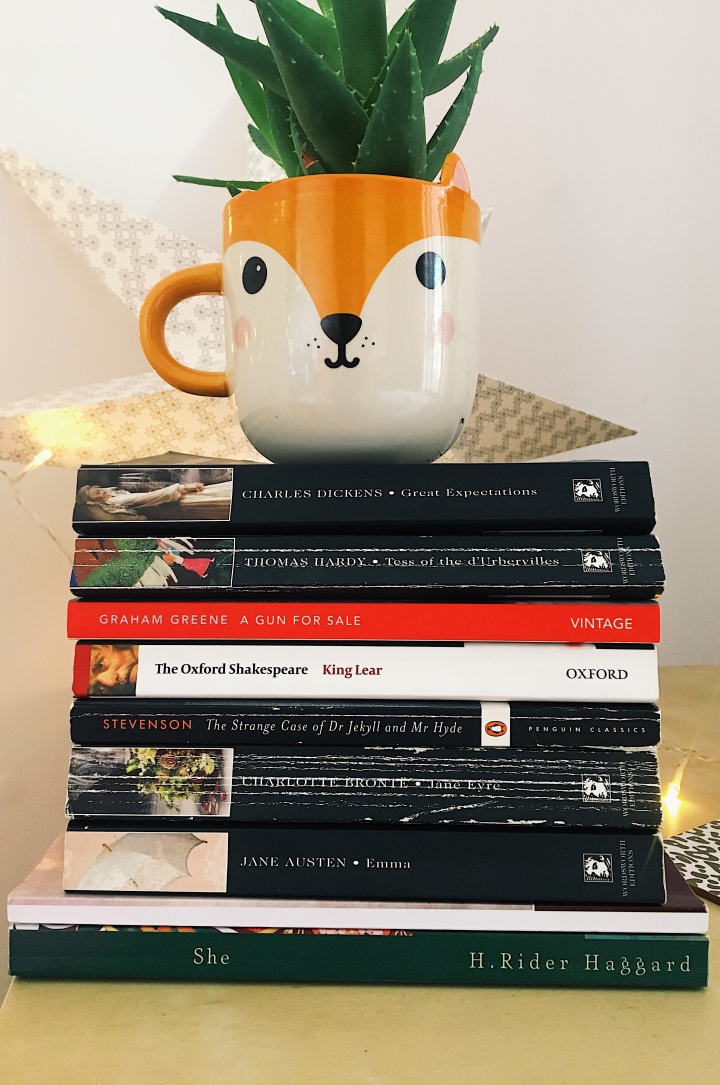 While I use novels as relaxants, time-fillers, mug stands and for a general hobby, I also study them at uni.  Due to studying a combined honours degree, of which one half is English, I have in my possession a plethora of novels which probably would never (and shall never, ever again) have been on my radar.  Thus, my classics library has been formed.

I have too many classic novels, canonical texts and books considered to have a legendary status to put into just one blog post – thus this is a tour of my Classics shelf Part I, featuring Jane Austen, Shakespeare, Virginia Woolf and more.

I have two copies of Austen’s Emma – one being a stand-alone novel covered in fluorescent yellow highlighter and scribbles, while the other is part of my Jane Austen anthology.  Emma is an almost coming-of-age story about a small town, rich bitch who thrives from getting involved in a: scandal; romantic drama; comical confusion, and, medalling in business she definitely shouldn’t be in.  I loved Emma.  The protagonist is unreliable and imperfect, yet lovable and likeable.   This is a serious reminder to pick that it back up, soon.

She by H. Rider Haggard

H. Rider Haggard was fascinated with Africa, zoomorphism, adventure writing and the female figure.  She encapsulates it all perfectly.  Due to being burdened with the son of a dead man, our protagonist sets off on a quest which has been passed down through his stepson, Leo’s, ancestors for generations.In the heart of Africa, they stumble upon an ancient civilisation governed by the mysterious She… An immortal woman who has been waiting for Leo to return to her, her whole life.

I originally gave She a 5* rating back in Spring, and I will forever stick by that.

I am in no way at all embarrassed when I say Virginia Woolf’s literature is not my cup of tea.  Her late 18th-century common style, her lack of character development and inability to jump timelines chronologically (those pesky modernists)  – no, no, no. Orlando will definitely remain university read.  A fictional biography, Orlando begins the novel as a male aristocrat and finishes the novel as a lady.  A celebration of Woolf’s love for her rumoured mistress, Vita Sackville-West, the art is ironic, satirical and somewhat interesting.

Gothic literature shall always have a firm place in my heart (I have been unwillingly immersed in it since sixth form – it is surprisingly hard to get away from) and so shall the brilliance of Robert Louis Stevenson’s Dr Jekyll and Mr Hyde.  A quick read, written elegantly and invitingly addictive; Jekyll and Hyde is a mystery drama which snakes, twists, turns and leaves you questioning until the inevitable final reveal.  Well worth investing a couple of hours within, you shall not be disappointed.

A tragedy like no other, William Shakespeare’s King Lear is revered, untouchable and surprisingly not all that difficult to follow.  While I have written a slightly more in-depth review here, in short, King Lear goes mad, all his family and friends die and naturally so does he too after going mad.  Interesting stuff, right?

A Gun For Sale by Graham Green

I have not read this one… Guilty as charged!  It was one of my core texts when studying in my second year of uni.  Maybe it is good, maybe it is bad. Have you read it? Let me know!

I vowed in my Spring book round-up post that I would only opt for the film adaptation over the original novel format of Jane Eyre, but I am still unable to throw my battered copy away.  Brimming with notes, highlighted lines and probably missing a page or two, the story of Jane Eyre is well worn and enjoyable, though remarkably unable to hold your attention for too long.  Worth the read once.

Tess of the d’Urbervilles by Thomas Hardy

Thomas Hardy is not an author who you opt to reach for on a sunny summers day, where joy ripples through your hair and you think life could not be sweeter when you are four pints in.  Hardy and his depressing, dark world of Tess of the d’Urbervilles is for stormy evenings where nothing seems right in the world.  It is drab, dingy and dull yet still well written.  Poor Tess, nobody wants to read that kind of suffering! Hardy again is not my guy.

We all know of Miss Havisham, the jilted bride, the lovesick, cruel lady of the tower, the familiar figure in Charles Dickens’ Great Expectations.  Dickens’ novel is paramount.  Again, bleak, dark and longwinded, we see poverty, unjust and unfair treatment, kindness, adoration, cruelty and more from this read.  An important work to have in your arsenal.

One thought on “Classics In My Library #1”