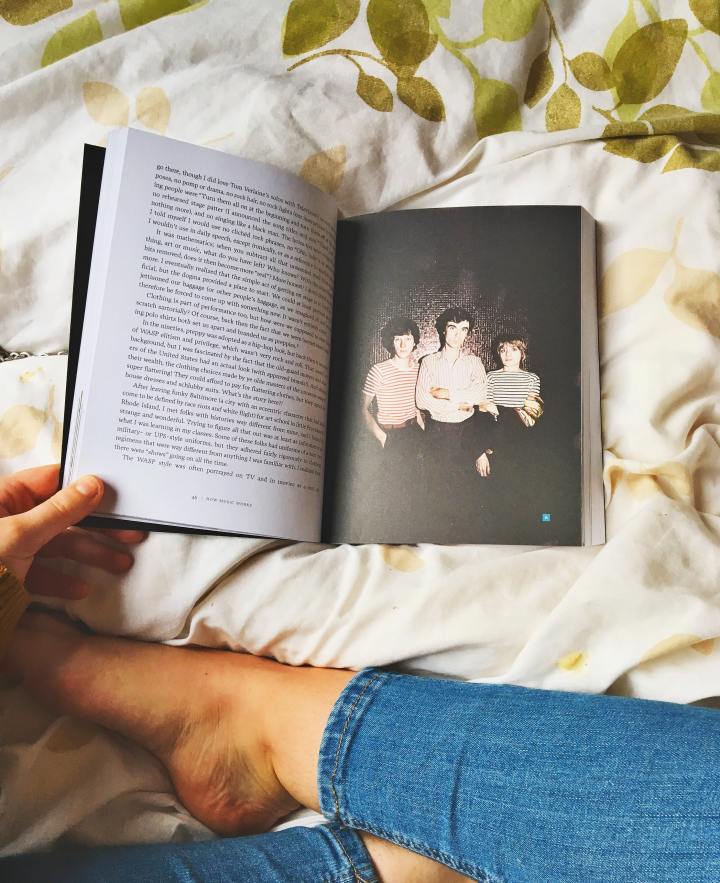 On Wednesday’s, is there any possible way to brighten up your mood so you become ever-so-slightly more motivated?  I spent the entire day in the flat moping around, cleaning the uncomfortable pile of dishes out of my bedroom and having a bash on the PlayStation.  What is the outside world? I had also drunk enough frothy oat milk lattes to damage my health, but what else is new?  Productivity has left the building.

I thought I would kick things off on this sunny Thursday by forcing myself behind the keyboard of my Mac and share with you some of the new books on my shelf, purchased via Amazon.

So.  I clambered onto Amazon (thank you Prime, you godlike thing, you) and purchased a brand new library.  Of the books, 11 have already arrived.  I am still waiting on another couple by BBC 6 Music’s Mark Radcliffe and Renegade by the iconic late Mark E. Smith – but for now, I have some corkers by Blur’s Alex James, a classic by Oscar Wilde and even one by a Psycho Killer, Qu’est-ce que c’est?

Bigmouth had his say, and in 2016 Johnny Marr had his too.  ‘Set the Boy Free’ is Marr’s account of The Smith years, his stint in The Pretenders, Modest Mouse, The Cribs and everything and anything in-between.  One of my all-time heroes who I have seen numerous times live as a solo-artist – I just had to buy this did I not?

One of my fondest music memories actually involves Marr, and his 2013 set at T in the Park.  It was the final day of the Scottish festival.  I had not had a wash since Thursday meaning I resembled the colour of a Christmas pudding due to a dust hurricane.  Marr was performing in the King Tut’s Wah Wah Tent and I simply could not miss the golden opportunity to see a man I had idolised and worshipped for half of my life.  He launched into the slick opening chords of ‘How Soon Is Now?’ And my eyes gushed – I was crying mud tears.

I am very excited to get my chops around this book, written by the guy with the coolest barnet in Manchester.

Peter Hook is a phenomenal writer.  His voice is blunt, his anecdotes are fruitful and his archaic stature in the centre of the Manchester music scene is legendary.  This is the second book I have picked up from Hooky – the first being ‘Unknown Pleasures: Inside Joy Division’ – and one I have lusted after for years – ‘The Haçienda How Not To Run A Club’.

The Haçienda, the New Order-owned legendary nightclub is now a flat block, which I would jump at the chance to live in, purely so I can gush to anybody who listens that I LIVE IN THE HAÇIENDA.   There is something seriously sad about that though is it not?  The nightclub at the forefront of Acid House now an expensive flat block.

Not only does this feature an emotional and somewhat scary recount of the past by Hooky himself, it also has yearly ‘What’s On At The Haçienda’ listings.  1983, if you are wondering was a cracking year; The Undertones in March, The Smiths in July, New Order two weeks later and then Frankie Goes To Hollywood in November.  Killing Joke and The Fall round off the year of 1983 in December.  Sweet as a nut.  Get me a time machine, now.

Firstly – if I ever change my surname via deedpol, it will be Ella Louise Makepeace Thackeray.  A fantastic name.  It is giving me chills.

Thought to be the birth of the Victorian domestic novel, ‘Vanity Fair’ is a book bursting with sexual debauchery, gossip, lies and deceit.  Sounds like me tbh.  As somebody who enjoys a good old period drama, this 600+ page novel, which also harbours a mammoth 66 chapters, is soon to become my passionate burden.  If you need me, I will be reading Vanity Fair for the rest of my life.  Pray for me world, I am about to rattle headfirst into a realm of scandal.  Makes a change from me being involved in it in real life. 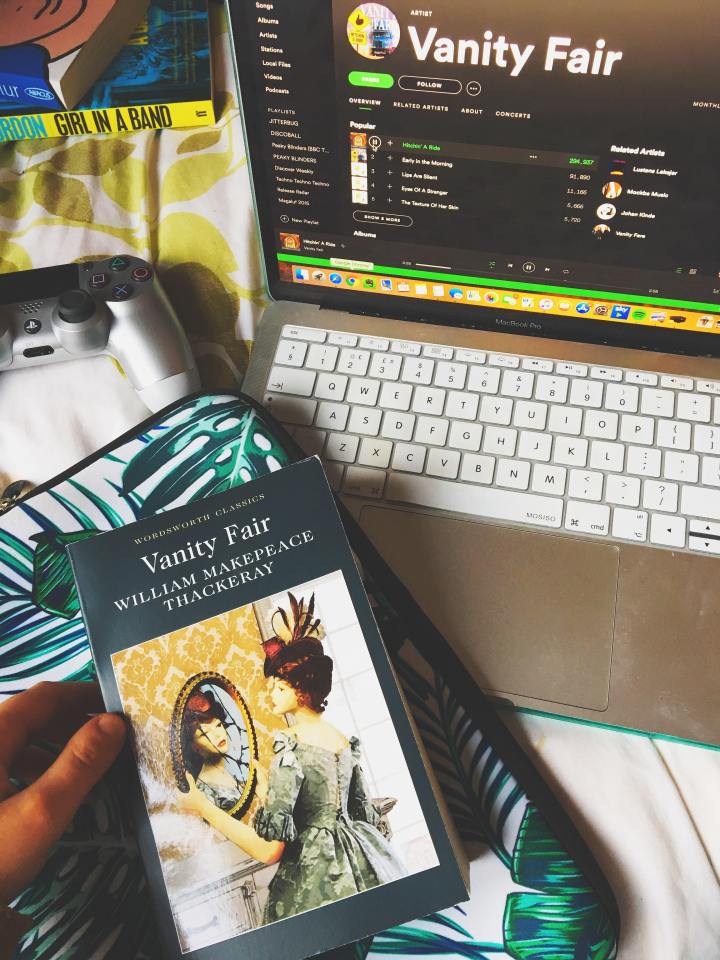 David Byrne is a cool cat.  There was a press shot of the ex-Talking Head circulating recently, where Byrne was pictured against an orange backdrop and I fell in love all over again with his image, style and music.  His book writing however, is something I have seemed to skim over until I picked up a copy of the “wildly ambitious”, “absorbing” and “brilliantly original” ‘How Music Works’.  These are not my words but the words of the people at the Observer, the Independent and the New York Times.  The people I tell you!

The book itself is essentially a comprehensive guide to how music and the industry works.  Surprising really considering it is called ’How Music Works’.  Who would have thought?  Byrne discusses the marriage between music and emotions, a fool-proof step-by-step guide to creating a scene and even features some richly coloured pie charts.  I do love a good statistic in chart form. 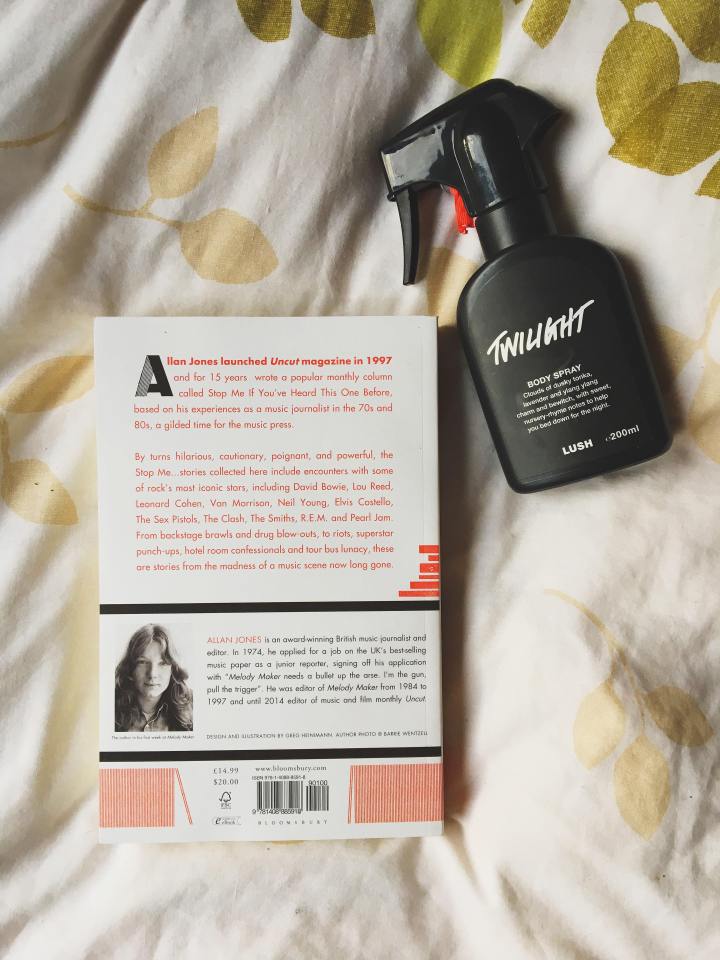 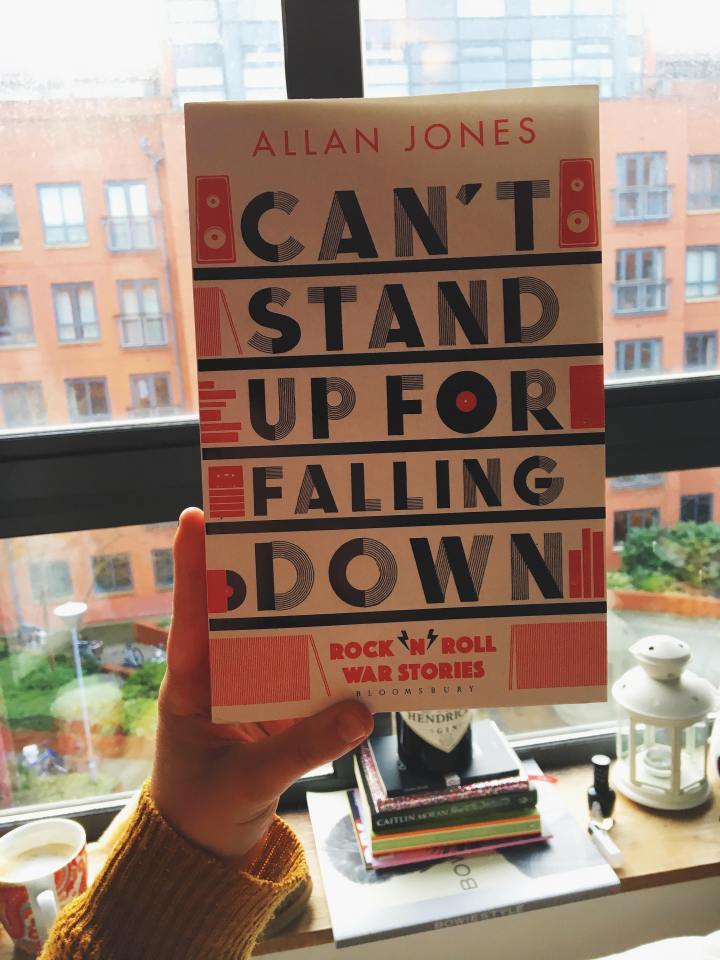 For those unfamiliar, Allan Jones is one of my all-time favourite music journalists. Melody Maker’s former editor, the possessor of some questionable locks and the face behind Uncut Magazine.  He is one cool bloke, and ‘Can’t Stand Up For Falling Down’ is a collection of his greatest anecdotes. Jones was at the helm of the music press, and these ‘Rock ’n’ Roll War Stories’ are the result of too many nights riding in the rodeo.

The book features stories about The Clash and The Sex Pistols, encounters with Morrissey and what it really was like living, breathing and scribbling about music in the paramount musical scene.  Before the days of Madchester, before the NME died a fatal death and when the only way to listen to the artists you love was to get up-close and personal with them, Allan Jones has marked them all down.  I know that this book is about to become one of my all-time favourites, which I will gladly read to my dogs in many moons to come.

Funny story; I was promised this novel on a review basis for a publication. Exactly one week later there was a review of this book in the publication, credited to me.  I had neither gained the copy of the book nor penned a word about it.  Not that funny of a story in hindsight, is it?

I have been craving this book ever since and finally, finally I have it in my grasp.  Kim Gordon of Sonic Youth is one of my absolute role models.  A fierce take-no-shit attitude with a serious spike of beautiful elegance and killer talent – Gordon is unbelievable.  This novel has been so highly recommended for her gritty truthfulness, honest emotion and staggering creativity throughout her writing.  Anything Gordon touches turns to gold, and I imagine that this baby is something to add to her legacy.

The second and final non-music related book I have purchased in this haul.  I am all about the classic gothic novel, and Oscar Wilde’s is exactly that.  It is something I used to read on my phone way back when, but I never succeeded in finishing nor understood what was going on.  Perhaps this year will be the year I succumb to the powers of this constantly discussed novel.  Honestly, every single lecture somebody will mention this bad-boy and I never have the foggiest idea of what is going on.  Perhaps 2018 will be the year of knowing things.

Alex James is my favourite Blur member after Damon Albarn, Graham Coxon and Dave Rowntree.  He is however, I am lead to believe, the only Blur member to pen an autobiography concerning the triumphant years of Britpop’s paramount band. Growing up is realising that Blur were and are still better than Oasis.  Growing up is also not wishing somebody would get “get cancer and die” – but we will let Gallagher Noel off, shall we?

Both a Sunday bestseller and NME’s former ‘Book of the Year’ (which year, I am unsure of) ‘Bit of Blur’ is already shaping up to be a witty recount of James’ heyday in one of my favourite ever bands. Enchanting and brutally honest opinions of going from living in a classic London box room to sipping on gin n juice high in the sky – the autobiography is set to be a serious insight into the rise, and fall, of Blur.

John Niven is somebody I can embarrassingly admit I have never read anything by before.  A shocker I know considering how much I used to rant and rave about the ‘Kill My Friends’ film, staring Tony from Skins – Nicholas Hoult as he is more commonly known by those who were not OBSESSED with the teen drama, like myself.

The story follows Steven Stelfox, a cocaine-fuelled A&R man who will not stop at anything to be top dog.  Now I will not spoil it, but people die. I know; it is as if the title ‘Kill Your Friends’ gave it away.  I personally thought the film was fantastic, and I am ready to dive into this novel.  I am definitely more a book person than a film person – so stay tuned to me shouting to the high heavens “THE BOOK WAS BETTER THAN THE FILM!”  You have been warned.

Keeping with the theme of killing, it was the front cover that drew me to this book of collected essays by Hanif Abdurraqib.  How could it not? I am beyond ecstatic that I found it.  I know now, from just reading a few fo the essays that this man is about to change my life, my perspective on music writing and enhance my abilities beyond all compare.  Me, me, me -but Abdurraqib let us talk about YOU. 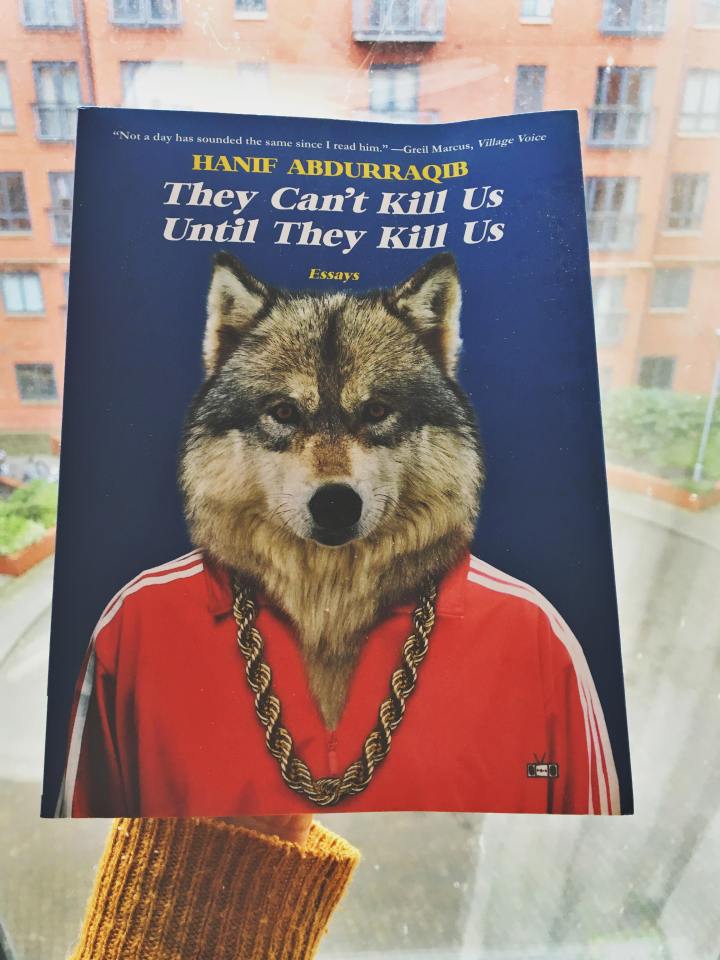 This man is simply fantastic.  His sentences span paragraphs yet remain controlled and electic – sheer talent radiates through the images he builds.  He teases his thoughts and brandishes his opinions in a gentle, convincing manner.  By the end of his readings, he has converted your mind, body and soul to believe you have seen what he has seen, felt what he has felt, and have the passion and drive to be as influential as him.  He is special, and a definite motivation.  I think I am in love. 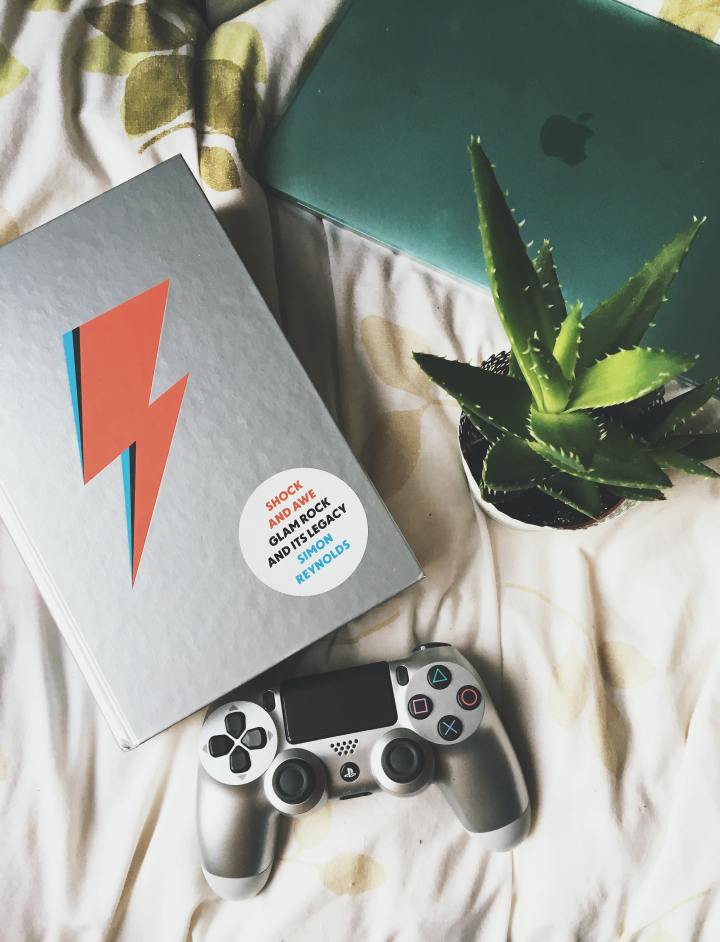 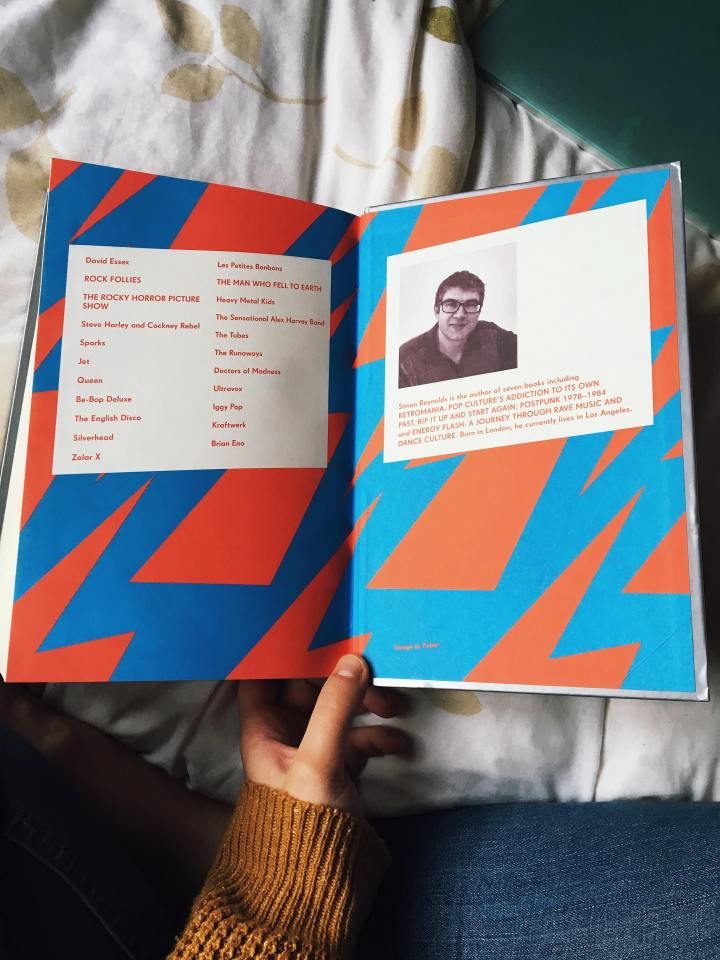 This bumper compilation of arguably one of the greatest gender-bending, experimental eras we will ever see, consists of highs, lows, laughs and a ‘no rules are the rules’ attitude.  Melody Maker’s Simon Reynolds himself is, of course, the legend who is penning the movement in a neat 654 pages.  Who else would it be?

Then and now in glam rock.  Then it was the Starman, now it is Lady Gaga.  Things change but the legacy remains the same, and Reynolds is letting us in on all the dark, hedonistic secrets.

As you can tell, I have went a bit overboard with the book purchasing, but I believe it is all for a good cause. I have lost my way with music journalism slightly however all of these books are about to bring me back to the real-world and reaffirm why I want this to be my life.  Also that I should not snort cocaine and then continue to cut off my friends’ limbs.

Keep your eyes peeled for an income of knowledge – these books will blow you away.