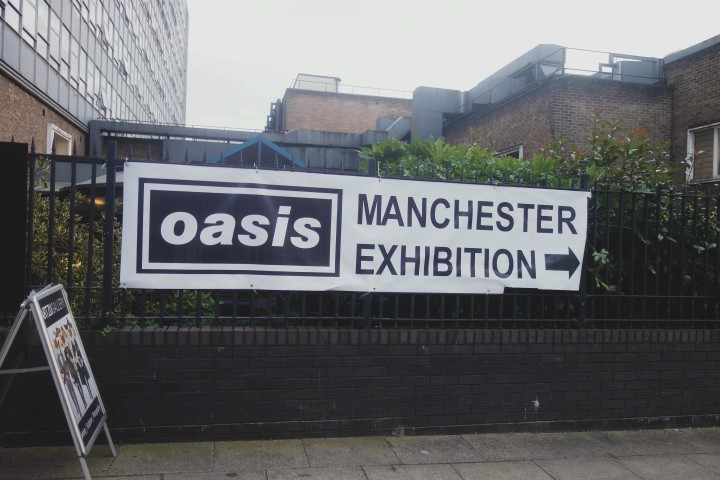 From 1993-1997 it’s arguable that there wasn’t a more important band in the world than Burnage-born, Oasis. Drawing nostalgia to the golden years, Lawrence Watson has curated the Chasing The Sun exhibition – a showed collection of unseen photographs, famous artifacts and lost footage – which has finally taken up rightful home at Manchester’s Old Granada Studios.

Step inside the Chasing The Sun Exhibition, and there are seventeen-year-olds mulling around Noel Gallagher’s treasured Union Jack guitar, while fifty-year-old couples swoon over the ‘She’s Electric’ handwritten lyrics. A collection of black and white photographs adorn the walls while a quirky pop-up replica of Bonehead’s West Didsbury living room attracts almost every fan in the building. Regardless of your era, there’s something at the Chasing the Sun exhibition for everyone. 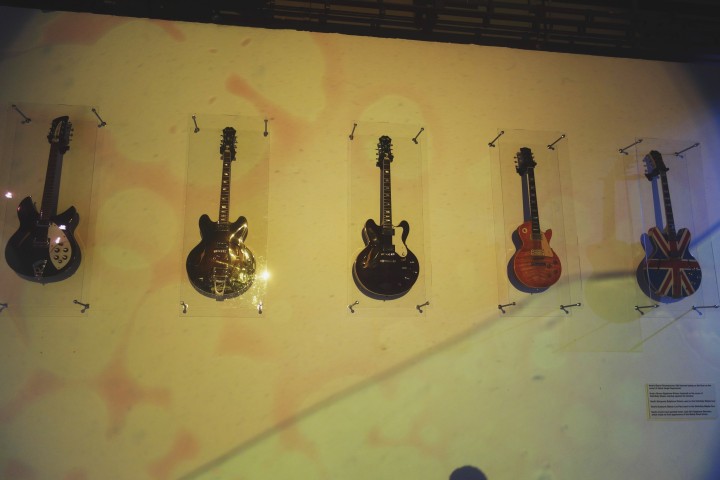 One of the more exciting elements of the exhibition, however, which has finally taken up residency in Manchester after its two-year London stint, is the dedicated projection room. Watson himself has crushed together various Top of the Pops performances (including ‘Supersonic’ from March 1994) with recent commentary from the older Gallagher brother as well as rarely seen older interviews with the band. There are benches to sit and watch history flash before your eyes, allowing you that precious nostalgia time. Elsewhere in the room, there are glass boxes brimming with crew passes and show programs from the past, as well as a gigantic Be Here Now album cover. Picture perfect; smile for the camera in front of Oasis’ third album sleeve.

While you can stand next to Be Here Now you can physically be a part of Definitely Maybe. As previously mentioned a replica of the living room, where Oasis’ iconic first album cover was shot, is available to bring to life. Whether you want to be perched on the sofa with guitar in hand like Noel, or pretending to watch the TV like Guigsy in the bay window, re-create the shot that has defined a generation with your friends and family.

Showcased elsewhere are unseen shots from Brian Cannon, who is responsible for the phenomenal ‘Roll With It’ photo shoot on a Weston-super-Mare beach, circa 1995. Work from Jill Furmanovsky and curator, Watson himself, can also be seen throughout the exhibit.

While images make up the main bulk of the Chasing the Sun exhibition, Liam Gallagher’s white parka, worn during Oasis’ seminal 2004 Glastonbury performance, NME, MTV and Brit Awards and five of Noel’s guitars are also all on show.

The Chasing the Sun exhibition leaves a sweet taste in your mouth. In Old Granada studios there is something to spark the attention and sweep the heart away from any Oasis fan. Regardless of whether the boys are back together or are destined to walk separate paths, Oasis live forever.