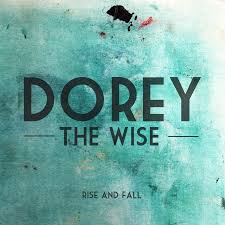 Branded ‘the future kings of indie rock’ by Gigslutz, Dorey The Wise are a four-piece hailing from East Sussex who boast an exceedingly thrilling amalgamation of sounds. While the year is still fresh, their newest single ‘Brave New Light’ is slowly-but-surely dominating airwaves and already capturing the hearts of the UK. We were lucky enough to have a chat with this band-to-watch-in-2015 to find out more about the story behind Dorey The Wise:

For readers who are currently unaware of the band, who are Dorey The Wise?

We are a four-piece Indie Rock outfit from Hastings on the South coast. We have a bit of a pop vibe on top of that too; catchy tunes with darker, lyrical undertones!

On first impressions, your band name immediately sparks attention, where did it originate from?

Nothing too exciting really! Unfortunately, I wish I could tell you otherwise. But it relates to alcohol and a girl, and that’s about it!

Who or what has inspired the band’s unique sound?

The new single, ‘Brave New Light’, is set to be released on March 15th – what is the inspiration behind the track?

The song is a mix of emotions really. It’s about that time when you first start seeing someone new and you like them. But you’re not sure of their feelings. Then you get those self doubts and decide you’re not good enough. It’s a self pitying song, but it sounds upbeat! I promise!

What lies in store for the four-piece in 2015? Are there any immediate plans for the release of an EP? Or even a Dorey The Wise debut album which can be exclusively revealed through Gigslutz?

Ah, cheeky! As it stands there is nothing we can announce. Sorry! We will be heading into the studio later this year to lay a few tracks down, but as soon as we have fixed information, we’ll get you in the loop!

Dream festival line-up: if you could curate your own festival, who would be the weekend’s headliners?

Tricky question! Because we all have different tastes, it would be quite a strange line up. I think for me Black Keys and Royal Blood would be high up on the bill, and Travis (trust me, they’re great live!), and then I think Led Zeppelin on the legends slot, of course! There are way too many for the list though. We’ll have to do two festivals at least.

And finally, Dorey The Wise, where can we expect to see your name in five year’s time?

In five year’s time I think we’ll have invested any money we have in to building a dinosaur island theme park. I saw a documentary about it with Jeff Goldblum, it looked pretty swell. Either that or we’ll own a crazy golf course!

Find out more about Dorey The Wise, and listen to the new single – ‘Brave New Light’ – here.