She Drew The Gun is an extremely captivating Liverpool-based collaborative project, fronted by the phenomenal Louisa Roach.  The group have given Gigslutz the honor of premiering the brand-new video for their debut single ‘If You Could See’, which is available to stream below. As well as the video, we also have an in-depth interview with Roach on working with The Coral’s James Skelly, mushroom tea parties and  her up-and-coming 2015 festival roster.

Could you give a brief biography of how She Drew The Gun came about and what inspired you to begin this journey?

I’ve loved music and playing guitar for a long time, but it took me a bit longer to realise I could work with words. One morning at about 4AM, when I was going through a bit of a difficult time, I sat and wrote a song that I thought had something about it. It took me a while to write the next one, but eventually the flow got steadier and I started playing open mics to a great reaction. I uploaded some home recorded songs onto Soundcloud, and that’s when Sian (Monaghan) got involved in the project, making the live sound a little more complete. The tunes started getting plays on radio shows, where they were heard by Gary Murphy (ex The Bandits) who came down to the next gig and eventually introduced me to James Skelly from The Coral. I’ve been working with him since then at Skeleton Key. The inspiration for the journey I suppose comes down to the way the songs and performances went down. I had some amazing responses in person and through messages or emails, they all add to the belief in what you are doing. This is a definitely a two way thing for me.

With a unique voice being likened to both Laura Marling and Beth Gibbons of Portishead, how much do you agree with these comparisons?

Somebody told me it sounds like Laura Marling and Portishead at a mushroom tea party and I quite liked that. There are certainly parts of the album that have been influenced by their sounds and style; I just love hearing what other people hear in the music. To be compared to artists like them is overwhelming.

The debut track from She Drew The Gun, ‘If You Could See’, is out on February 23rd 2015. What are the key themes or stories behind the single?

The song is about a person who is fed up with the way things are and reaches out, like a prayer for someone to hear them. On the other side, a person or group of people from somewhere in the future are reaching out for someone from the past to hear them, to see it from their view, before it’s too late. Deep down it’s really about the current condition that us non-religious, first world humans find ourselves in, to want to make a difference, to want to fight for what’s right and against all the wrong things we can see going on, but at the same time only having one life, one short time on this earth, and how many of us also want to be selfish and enjoy our time. It’s about that human predicament, and the answer for the person in the song is to pick up their pen or guitar and get writing about it.

At Liverpool Sound City this year you caught the eye of James Skelly [Coral] which lead to you begin working with him in the studio on She Drew The Gun’s debut album. How has working with Skelly, if at all, influenced the direction of the album?

James has had a big influence in the direction the album’s gone; it’s been done very experimentally. It wasn’t one of those where you have already developed the sound and go in to the studio to put it all down, it was more like “let’s start with the bare bones of the track and see where it goes”. Even the rhythm guitar sounds on most of the songs we just messed about with, using amps and pedals till we found something interesting to build the track from. I think I was looking for someone to work with to help me bring out the potential in the tracks and I’ve found that. We’ve made some weird and interesting trippy-pop I think.

As you played Liverpool Sound City 2014, do you have any intentions of playing the live music celebration again this year or any other festivals across the UK?

Well Jack (guitarist) and I will be supporting The Sundowners on their UK tour this February, so that will be a launch pad for more gigs around the country and festivals this year. I know we’ll also be playing at some small festivals, we’re confirmed to do Chilled In A Field Festival near Brighton in August and we’re talking about other dates at the moment. Of course we want to get out there and hit the festival circuit as soon as! We’re listening if anyone wants us. 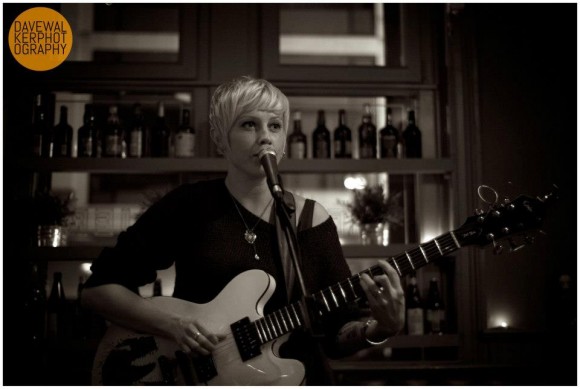 Could you possibly disclose any exclusive details about She Drew The Gun’s debut album to Gigslutz?

It’s still our secret, but I can let you be the first to see the first video, edited by Dominic Foster. There’s a shot of James playing some mad Japanese guitar in there that I filmed in the coral caves in Hoylake if you can spot it.

If you were forced to listen to one debut album for the rest of time, which would you choose and why?

I think it might have to be The La’s [self-titled]. Would Lennon’s Plastic Ono Band even count as a debut? I’d choose that on another day.

And finally She Drew The Gun; will there be any surprises coming our way from you in 2015?

Yes there will be…  I’ve got some things bubbling, but sure plenty of the year will be just as much of a surprise to me.

Thank you so much for your time!