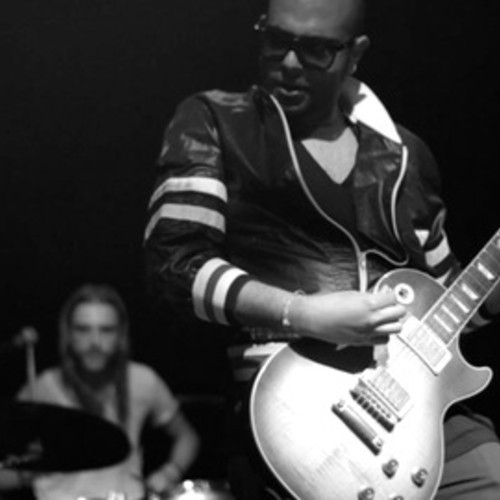 Finding himself playing guitar for the iconic Happy Mondays, co-launching the ‘Getloaded’ club night at London’s Turnmills nightclub, supporting the likes of Glastonbury 2014 headliners Kasabian and developing Rick Genest AKA Zombie Boy’s music project in LA last year, it seems Kav Sandhu’s (better known as rock n’ roller KAV) world never stops spinning for too long. With brand-new debut album ,The Man With No Shadow, having recently just been released, you can say you heard it here first: this supreme album is about to blow everyone and everything away.

Opening with the exceedingly infectious ‘Dance In A Panic’, The Man With No Shadow gives the listener a quick flash of sparkle; showing off both KAV’s professionalism and musical ability. Pairing a wicked guitar line with a vocal brimming with pure controlled madness; ‘Dance In A Panic’ is the perfect storming opening, starting The Man With No Shadow with a gigantic, colourful bang.

Following ‘Dance In A Panic’ is ‘Blaggers N’Liars’; a pure, adrenaline-filled rally, which had the honour of featuring on the American re-make of Shameless back in 2013, and ‘Free Spirit’; a powerful three-minute joy-ride, which oozes an exclusive energy which is almost echoed on both ‘King Of The World’ and the surprisingly heavy ‘Ghost Town Hat’.

Toning down and throwing an acoustic guitar into the mix, KAV next brings us ‘Soul Kid’; the first real offering  and insight into the pure, raw mind of the Leicester lad himself. Although ‘Soul Kid’ seems short, yet extremely sweet, the songs action-packed brother, ‘Sonic Soul Lovin’, easily makes up for time, with five minutes and thirty seconds of grace touching the listeners ears, leaving both satisfaction and ravenous hunger trailing after it.

As the credit-worthy, soul-touching debut album from KAV draws to a close, the man behind the music has one, final, legacy-cementing trick up his sleeve, This ‘trick’ takes the form of final track ‘Lonely Man’. Heavily cloaked in emotion and with nostalgia plainly creeping up its spine, ‘Lonely Men’ closes The Man With No Shadow on the most death-defying high.

A rollercoaster of emotions and, most importantly, pure electricity courses through KAV’s The Man With No Shadow, making this possibly one of the strongest album releases of 2014. With definite future anthems and beauty blooming from every track; it won’t be long until KAV has the world in the palm of his hand. Watch this space, The Man With No Shadow is coming.